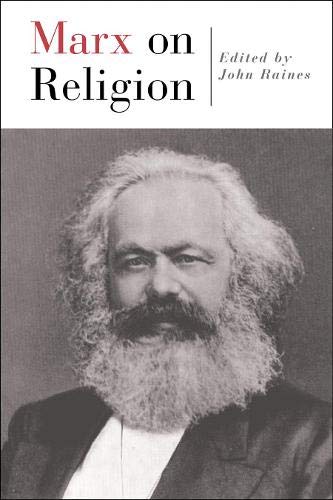 All of Marx’s significant writings on religion. Editor, John Raines, offers the full range of Marx's thoughts on religion and its relationship to the world of social relations. Raines shows that Marx had a far more complex understanding of religious belief. Equally important is how Marx's ideas on religion were intimately tied to his inquiries into political economy, revolution, social change, and the philosophical questions of the self. The book also includes a study guide to help readers to understand the significance of this often under-examined component of Marx.

From the Inside Flap

"Religious suffering is at one and the same time the expression of real suffering and a protest against real suffering. Religion is the sigh of the oppressed creature, the heart of a heartless world and the soul of soulless conditions. It is the opium of the people.

"The abolition of religion as the illusory happiness of the people is the demand for their real happiness. To call on them to give up their illusions about their condition is to call on them to give up a condition that requires illusions. The criticism of religion is therefore in embryo the criticism of that vale of tears of which religion is the halo."
?Karl Marx, from Critique of Hegel's Philosophy of Right

"Like the Hebrew prophets of old, Marx knew that to speak of social justice we must become socially self-critical, and that means becoming critical of the ruling powers?whether they be kings or priests or investment bankers.... For Marx, all ideas are relative to the social location and interests of their production. And like the prophets before him, the most revealing perspective is not from the top down or the center outward, but the...point of view of the exploited and marginalized. Suffering can see through and unveil official explanations; it can cry out and protest against the arrogance of power."
?John Rains, from the Introduction

John Raines is Professor of Religion at Temple University. He is the author of over a half-dozen books, including, most recently, What Men Owe to Women: Men's Voices from World Religions.

Relating Religion: Essays in the Study of Religion

Introducing Religion: From Inside and Outside

The Psychology of Religion, Fifth Edition: An Empirical Approach

College Religion & Philosophy Bookstore Copyright © 2022. All rights reserved. Powered by Fresh Cloud
Do NOT follow this link or you will be banned from the site!
Cookies help us deliver our services. By using our services, you agree to our use of cookies. Learn More Accept